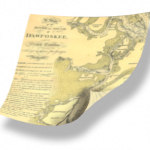 Unearthing the vast and colorful history of Daufuskie Island is no easy task. With artifacts found on the island dating as far back as 7000 BCE, it is apparent that the island has a rich history. But with limited written records and resources, Daufuskie’s history is ever evolving as new information comes to light.

The first inhabitants that we have records of are the Creek, or Muskogee, Indians. Cultivating the many natural resources of our area, the Muskogee Indians thrived on Daufuskie. Early European explorers, including the Spaniards, French, English and Scottish, first explored Daufuskie dating back to the 16th Century.

Original land grants were given to Native American traders, although relations became strained and after a number of skirmishes the Muscogee Indians were forced off the island in lieu of death or imprisonment. Lands were gifted to numerous families, eventually leading to 12 plantations on Daufuskie Island.

Plantations were small, and produced crops such as sea island cotton, corn, potatoes and indigo. Filled with Loyalist during the Revolutionary War, Daufuskie experienced a number of clashes with the Tories of Hilton Head. Post Revolutionary War, plantations on the island continued to produce and export crops. The island stayed relatively quiet during the Civil War, however there were Union troops stationed on Daufuskie.

After the Civil War, some lands on Daufuskie were repossessed by original slave owning families. Parts of the island were sold to freed slaves returning to the area. This gave rise to Daufuskie’s Gullah population. Being forced to America through slavery, descendents of West Africans worked the lands on the South Carolina sea islands. The descendents of these West Africans kept tight their cultural heritage, creating the rich Gullah culture now present.

Up until the mid twentieth century, Daufuskie had a substantial population of mostly Gullah families. Oystering, farming and logging were just a few economies that drove Daufuskie Island. But competing pricing, pollution and limited resources led to an incredible decline in the island’s economy. Many families left the island in search of work, establishing roots elsewhere.

Developers came onto the island in the 1980s and 1990s. Haig Point, Bloody Point Resort and Melrose were developed as resort communities. Daufuskie Island now boasts around 450 full time residents.